On February 29th, the V&A opened Europe’s first major exhibition on kimono curated by Anna Jackson and Josephine Rout. The ultimate symbol of Japan, the kimono is often perceived as traditional, timeless and unchanging. Kimono: Kyototo Catwalk will counter this conception, presenting the garment as a dynamic and constantly evolving icon of fashion.

It is then natural for the brand Yoshikimono to partner with V&A and be featured in the exhibition. Indeed, the brand has been created 10 years ago by iconic Japanese rock star Yoshiki. Yoshiki is the founder of rock band X Japan who sold during their international career more than 30 million albums. Within his collections, Yoshiki wants to celebrate the Kimono as a traditional garment but with a fashion contemporary twist. His aim is to introduce the art of the kimono to the younger generation in order to perpetuate this Japanese tradition.

Highlights of the exhibition include a kimono created by Living National Treasure Kunihiko Moriguchi, the dress designed for Björk by Alexander McQueen and worn on the album cover Homogenic, and original Star Wars costumes modelled on kimono by John Mollo and Trisha Biggar. Designs by Yves Saint Laurent, Rei Kawakubo and John Galliano will reveal the kimono’s role as a constant source of inspiration for fashion designers. A fabulous kimono made with lightnings patchwork inspired by Kiss band will be featured from one of the first Yoshi kimono collections. 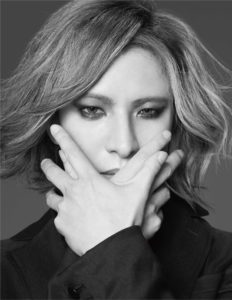 YOSHIKI QUOTES FOR PARTNERING WITH V&A

Q: Why did you decide to go into fashion, and launch the YOSHIKIMONO brand?

When I create music, I’m not just creating a combination of sound, I’m creating the life which some people might have lost, which my father lost. In terms of fashion, we are not only decorating the surface, we are revitalizing the inside every time we put something on our skin. Music and fashion co-exist in the same world. My father was a kimono creator and pianist… I guess that’s in my blood also.

Q: How does it feel to be present at the first major Western exhibition on kimono?

It’s such an honor to be part of this exhibition. I can’t thank the curator enough for bringing kimono culture to this amazing museum. I feel grateful not only for my brand YOSHIKIMONO being part of it, but grateful for the entire kimono industry coming into the spotlight.

Q: In your opinion, does kimono have a place in the Western cloakroom and in fashion in general? Why is that?

A century ago, who would have thought Japanese cuisine could have made it in the western world? Who knows? A century from now, people might be wearing kimono in space… Even on Mars.

Q: How do you want your brand to evolve in the coming years?

I think I’ve contributed to changing the Japanese music scene. My way of showing respect to all those artists including fashion designers is the word “disrupt”. As you know, kimono is as traditional as you can get in Japan, a country which most people consider to be conservative. I would like to keep tradition, and at the same time I’d like to break the unwritten laws the industry has made, which keep them confined within their own boundaries. These unwritten laws may not only apply to this specific industry, they may apply to any sector. There’s a fine line between the “sane and insane”. I’d like to keep walking on that thin line until I realize which side I belong to, or which side the world wants to belong to. Regardless, I feel very grateful that I’ve been given the opportunity to express my heart.

The exhibition will take place at Gallery 39 and North Court, V&A, London. From February 29th to February to June 21st, 2020.