Jason Cerda is an international Latin pop recording artist and choreographer. Highly motivated and self-driven, Cerda has made an impact in the music industry.

With unraveling opportunities set before him that has allowed him to perform with artists such as Ludacris, Nelly, J. Balvin, Becky G and many others. His success has enabled him to tour in the US, Dominican Republic, Columbia, Puerto Rico, and Guatemala establishing a wide fan base from all over.

Jason Cerda also performs at other well-known events in the Latin community such as, The Puerto Rican Day parade, People Espanol Festival in New York, Fiesta DC in Washington DC, Calle Ocho Festival in Miami and Cali Music Festival in Las Vegas, NV. With his newest single “Telefone” that was released in January 2018, being a huge hit, people from all over are anticipating what’s next? Aside, from singing and dancing, you can catch Jason Cerda on the big screen, he was featured in “Onze Jongens in Miami” which was just released in theaters in The Netherlands and will be hitting Netflix soon after. 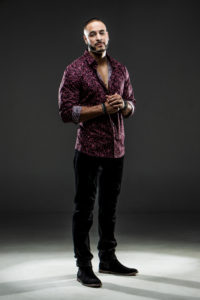 We were able to get together with Jason Cerda for an interview with High Rise Life and here is what he has to say.

Q: Can you give us some insight on who you are and when you experienced your first big break?

I’m an international Latin Pop recording artist from Washington D.C. who began my career originally as a back-up dancer and choreographer. However, I made my way into the music business and have been recording music in both English and Spanish for the last 14 years. I have been fortunate enough to have had 3 singles on the Latin Tropical Billboard charts and have performed all across the world including in South America, Japan, the Middle East, and the Caribbean. I would say that breaking the Top 10 on the charts was my “break” because it opened a lot of doors for my career.

When it comes to making new music it always depends on the producer I’m working with and what the vibe of the song is. Sometimes the lyrics come to me right away, other times I just sit in front of an open mic and let ideas flow out of me until I find something I like. Once I find the flow I like, then I’ll sit and come up with my concept. Most times I like to find my pre-hook and hook before writing the verses, just so I know where I want to go with my story. Sometimes it comes easy and other times I have to step away for a bit and come back to it. Either way, it’s a beautiful process and I love that I get to make music for a living.

Q: What is the best advice you’ve been given?

I was 18, the same year I began pursuing my music career and at the time I was working a bunch of random jobs just trying to make money to be able to invest in career, when a friend of mine who happened to be a producer as well said something to me that has stuck with me until this day. He told me, “If you really want to take this seriously, surround yourself with music at all times. Get a job that allows you to be around music and always listening to new ideas. Find something that will have you always wanting to be inspired and creative.” The next day I went to my job at Footlocker, gave my two-week notice and began my journey as a choreographer and dance teacher and never looked back. I was around music 24/7 and most importantly doing something I loved to do just as much as singing.

Q: What do you enjoy most about being an artist/entertainer?

I think what I enjoy the best about being artist/entertainer is that I get to connect with people on so many levels. Music is the one thing that brings people together no matter what language you speak, or what race you are. So, if I can make something that will connect with someone, AND I can make them dance at the same time then that is the most satisfying feeling.

Q: If you had the opportunity to collaborate with any artist who would it be and why?

I think at this moment in time, my ideal collaboration would be with Drake. Not only is he one of the best artists in the world right now, but now he’s working with many Latin artists and making great music. I think we could make some really good music together, and I most definitely would make him do some choreography in the music video!

Q: Who are some of the artists you have had the opportunity to open for?

I’ve been fortunate enough to open for so many bigtime artists in the industry over the span of my career. Some of my favorites are J. Balvin, Maluma, Bad Bunny, Ozuna, Farruko, Ricky Martin, T-Pain, T.I., Ne-Yo, Wisin y Yandel, Pitbull, and J.Lo.

Q: What do you feel is the best song ever released and why?

That’s a very tough questions because I have many favorite songs for many different reasons. My all-time favorite song has to be “You Make Me Wanna” by Usher. To me, it was one of the best produced and lyrically written songs Usher every made. The music video was also very unique and did the song justice. As far as more recent music, I would have to go with Bruno Mars “Please Me”. To me it’s one of the most well written songs, and the melody arrangements are timeless. Not to mention it brings back the feeling of the 90’s.

Q: Aside from music, what are some other things that you are involved with?

Over the last year I entered a new business venture that I’m very proud of. I officially opened my own dance studio in my hometown of Alexandria, Virginia. It’s a drop-in based facility where we offer more than 20+ styles of dance and fitness classes. This year in 2020, we are expanding the studio and taking it on the road by starting our first ever “Cerdafied Pop Up Experience” with our first stop being in the beautiful 305 on April 25th.

Q: How do you incorporate balance between both?

Many exciting things! A movie that I was featured in “Onze Jongens in Miami” just released in theaters in The Netherlands and will be hitting Netflix soon after. Also, I will be releasing new music and touring. Lots of exciting things happening for sure. Looking forward to what 2020 has in store for me. All I know is that I’m going to embrace every blessing and tackle every obstacle with a smile on my face.

J.M. Gonzales has a strong passion for writing. She is author of two books “Broken Silence” and “Wild Card” both of which can be found and purchased on Amazon and Barnes & Noble. She is currently a full time student with Ashford University and is on her way to receiving her BA in Journalism. Meanwhile, she continues to maintain her personal blogs and enjoys traveling.
IG: j.m. gonzales