Nearly 1 in 4 Home-Purchase Offers in the Bay Area Faced Competition in April, Compared to 15% Nationwide

Just 15 percent of offers written by Redfin agents on behalf of their home-buying customers in April faced a bidding war, down from 60 percent in April 2018, according to a new report from Redfin, the tech-powered real estate brokerage.

“Right now, could be as good as it gets for buyers who want to avoid getting involved in bidding wars and price escalations,” said Redfin chief economist Daryl Fairweather. “There are many forces at play that may lure buyers back and create more competition soon. Interest rates are low compared to last year, price growth has stalled and have even fallen in some West Coast markets, and wages are growing.”

The San Francisco Bay Area was the most competitive metro in the nation in April, with 22 percent of offers facing competition. This is down from 75 percent a year earlier, but up from the January low of 17 percent.

Since January, the Bay Area and Phoenix have seen the biggest increases in the rate of bidding wars, up 5 points in both metros — more than Seattle (1 point), San Diego (<1 point), Los Angeles (2 points) or Boston (2 points).

“Multiple billion-dollar San Francisco-based companies are going public this year, so I wouldn’t be surprised to see Bay Area bidding wars come back with a vengeance, pushing prices back up by next year,” said Fairweather.

Although the market is far less competitive than it has been for the past seven years, Bay Area buyers should still be prepared for a bidding war on the most desirable homes.

“We are definitely starting to see multiple offers again,” said Redfin agent Saleem Buqeileh. “Most move-in ready single-family homes are receiving four or five offers, and homes that are priced well below nearby recent sales are frequently getting 10 or more offers.”

“In San Mateo even the condo market is heating back up,” added Redfin agent Ellie Kravets. “We’re frequently facing at least three to five competing offers, most of which have waived contingencies or are all cash.” 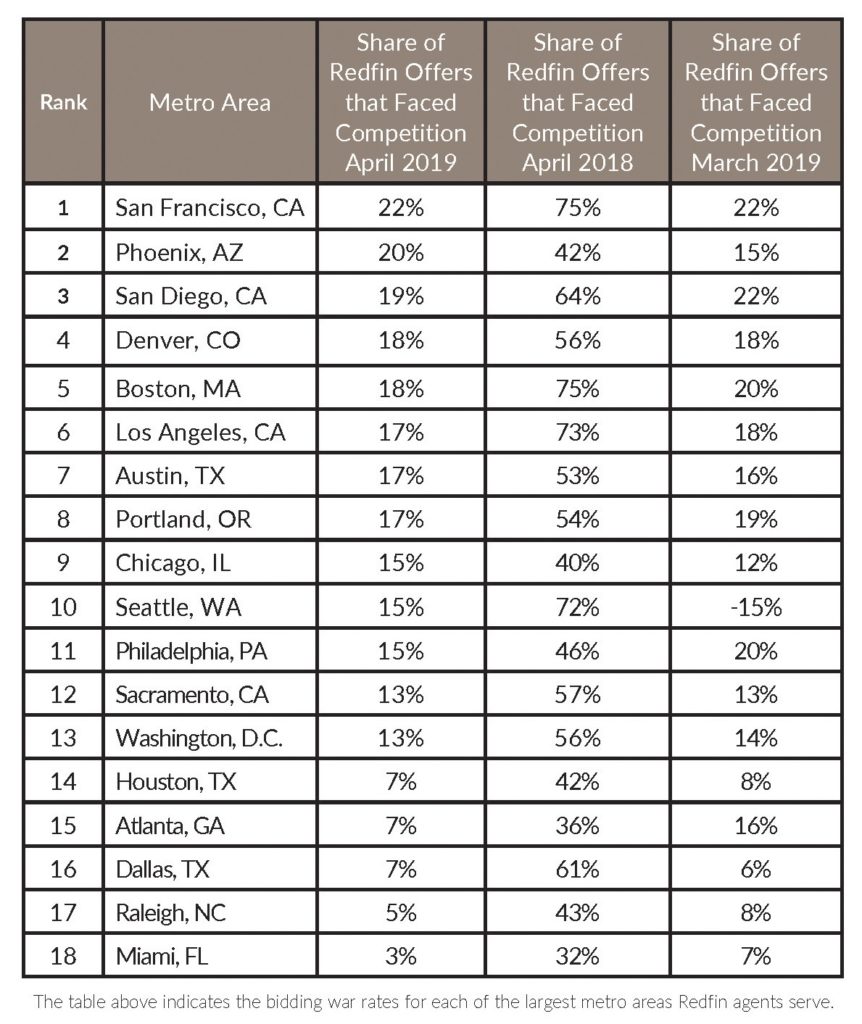 The rate of bidding wars has fallen by at least 22 percentage points from a year ago in every large market that Redfin agents serve. The largest percentage-point declines in April compared to a year earlier were posted in Seattle (-57 points), Boston (-57 points) and Los Angeles (-56 points). The smallest declines were in Phoenix (-22 points), Chicago ( -23 points) and Miami (-25 points).