Regenerative Medicine is the process of replacing, engineering, or regenerating human cells or tissues to restore normal function.

The premise is to stimulate the body’s own repair mechanisms to functionally heal previously damaged and irreparable tissues. Until recently, regenerative medicine had been a research terminology used to represent engineering or regenerative cells/tissues to rebuild normal function. Now stem cell clinics offer therapies for all sorts of ailments. We will briefly explore this perplexing topic and try to answer some basic questions such as what are stem cells? Why is there a controversy? Where did this idea come from? Who can benefit? What are the risks? And why is the government so alarmed?
WHAT ARE STEM CELLS?
Stem cells give rise to every organ and tissue in the body. Specialized cells that make up the tissue in our bodies originally came from stem cells formed after fertilization. Stem cells continue to function throughout the lifespan of the individual. They help replace injured cells and tissues lost to normal wear and tear. For example, cells in blood, skin, hair, and lining of the gastrointestinal system lose cells every day.

In order to produce new cells, stem cells self-replicate, and depending on the site they are located in, they can specialize to that specific tissue or organ. Human stem cells can be divided into two general categories, embryonic and adult. Embryonic stem cells can give rise to all the cell types in the body, thus they are considered pluripotent. They are obtained from an early embryonic stage of development (blastocyst), typically 3-5 days after fertilization. Adult stem cells are specialized cells which can produce some of the mature cells localized within the specific tissue or organ where they reside.

WHAT IS THE CONTROVERSY?
Stem cell therapies, the newest modality utilized in regenerative medicine, has been associated with legal and ethical concerns. Embryonic stem cells are the most controversial and until recently limited with federal funding. Human embryonic stem cells are obtained from cells created by in vitro fertilization (IVF) that are no longer needed for assisted reproduction. They are not obtained from eggs fertilized in a woman’s body. The ability to obtain stem cells from other tissues such as umbilical cord, amniotic fluid, and adult tissue has circumvented some of the ethical concerns of embryonic stem cells. The same applies to stems cells derived from the placenta and adult tissue. The use of the former has been limited because of the processing of the tissue involved. As technology improves, so will access to viable stem cells. More recently, adult stem cells are being manipulated to become immature precursor cells which can then develop into a variety of cells. This is the induced-pluripotent stem cells (iPS cells), which shows promise in the future due to ease of production and potential abundance source of stem cells.

WHERE DID THIS IDEA COME FROM?
The concept of regenerative medicine has been around for many years. The theory that inflammation is necessary for healing and that stimulating inflammation may be beneficial is an ancient one. Prolotherapy (proliferation therapy) was developed in the 1930’s as a procedure which entailed injecting an irritant solution into joints or tendons. It was hypothesized that inflammation is the initial step in healing, and by injecting inflammatory mediators into damaged tissue, it may aid and accelerate recovery. Even though the practice has fallen out of favor over the past 20 years, there is some evidence that it may be effective in treatment of some conditions (tennis elbow).

The first stem cells were used in the 1950’s as bone marrow transplant for patients with leukemia and in patients with excessive radiation exposure. Over the years, research and technology has led to sourcing of stem cells from many different tissues. This has allowed stem cell therapies to be utilized in clinical practice for pain management and regenerative medicine.

Platelet Rich Plasma (PRP) can be thought of as a solution which contains a large volume of platelets and other cells which aid with the healing process. Platelets contain inflammatory mediators and these molecules are central to the healing process. Their use began in the 1970’s. PRP was eventually popularized by famous athletes whom used it for their sports injury. PRP is typically obtained by drawing the patient’s own blood and spinning it down (centrifuged). PRP has been the most researched of all the biologics and most commonly utilized in joints (elbow, shoulder, knee, and hip). 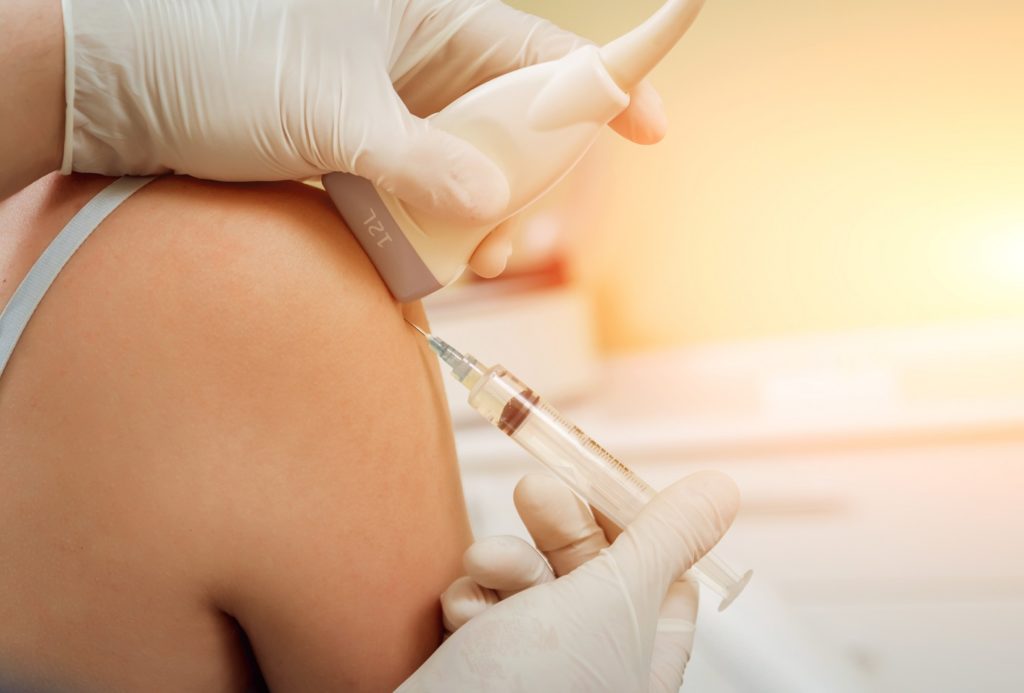 Stem cells are obtained from several sources such as bone marrow, fat tissue (adipose), amniotic, and embryonic. Bone marrow stem cells, also called Mesenchymal Stem Cells (MSC), are typically obtained from the pelvic bone. MSC have the potential to form a variety of cell types including bone (osteocytes), cartilage (chondrocytes), muscle (myocytes), and fat (adipocytes). MSC cannot form blood cells, which are formed from stem cells obtained from cord blood. Fat tissue is also a great source for MSC. Amniotic fluid has mainly growth factors and embryonic stem cells can theoretically produce any type of tissue.
Of note, most of these modalities are considered “experimental” by health insurance companies and are not covered.

WHO CAN BENEFIT?
This is still a very new field and there is ongoing learning with new research as which modalities work for which disease process. In order to recommend the appropriate procedure several factors are taken in to account, which include the underlying problem (pathology), the severity of the disease, and previous response to other treatments. Patients tend to fall in to three general categories. 1) Patients without any symptoms who are at high risk for degeneration, 2) Patients with symptoms and early stage of disease, and finally 3) Patients with symptoms and advanced stage of disease. In general, the third group tends to have diminished response and earlier return of symptoms because of the advanced stages of degeneration.

WHAT ARE THE RISKS?
As with any procedure that involves a needle, there is risk of bleeding, infection, and nerve damage. The clinician will have a list of “Do’s & Don’t” for the patient. The main item will be to stop any non-steroidal anti-inflammatory drugs (NSAIDS) or steroids, prior to the procedure and for up to four weeks after the procedure as these medications curtail the effectiveness of the therapies. There has not been any incidents of tumor growth or transformation of stem cells into tumor cells in the US. However, there is a theoretical potential where injected cultured stem cells may go to a site where a tumor cell is dormant and potentially aid in their growth. Injection around the spine carries a higher risk as with any interventional spine injections.

WHY IS THE GOVERNMENT SO ALARMED?
In 1997 the Food and Drug Administration (FDA) created the Tissue Reference Group (TRG) to regulate cellular and tissue-based products. The FDA has the authority to regulate stem cell products in the US. To the FDA the stem cell treatments are either FDA approved, or they are being studied under an Investigational New Drug Application (IND). The latter is a clinical trial submitted and allowed to proceed by the FDA. The FDA is concerned about patient safety. The FDA is taking a tough stance against clinics which claim unrealistic or false treatment benefits. The only stem cell-based products that are FDA approved consist of blood forming stem cells that are used in transplant procedures to treat patients with cancer and disorders of the immune system and blood. All the rest of the procedures are NOT FDA approved. They are being performed under the sponsorship of clinical trials or just at the direction of physicians who follow certain criteria (the product is minimally manipulated, it is used in person whom it is obtained from, and not significantly altered). There are case reports of significant complications. One patient eventually became blind after having stem cells injected into the eye. Another patient received a spinal cord injection outside the US and eventually developed a spinal cord tumor. These cases are rare, but the consumer needs to be well informed.

Stem cell therapies in regenerative medicine is in its infancy stage. However, there is a lot of excitement that these therapies may offer the potential to treat a variety of diseases or conditions. Which product and which modality work the best for specific disease has yet to be determined. There are plenty of anecdotal evidence, and some research on specific diseases with certain modalities. Until standardization is established, one should be well informed about the product, modality, and the disease state seeking treatment for.

Pouya Mohajer, M.D.
Director of Spine & Interventional Medicine at CellAxys
Diplomate of the American Board of Anesthesiology
Subspecialty in Pain Medicine